Dear family & friends,
What a lovely year it has been, filled with unexpected and delightful changes.  Last year, I left Portland on Thanksgiving to spend December with family, not knowing where the path would lead.

I stayed through mid-February, covering maternity leave for the McCook Central High School assistant librarian, and helping with the one-act play.  Christmas Day 2014 brought a letter from Camp E-Nini-Hassee, an all-girls therapeutic wilderness program in Florida.  Under the Eckerd umbrella, ENH is a sister camp to my former beloved Camp E-Ma-Etu in North Carolina, where I spent 2007-2009.  I have often thought fondly of my days with Eckerd and considered returning in one capacity or another.  I left for Florida in February, only to promptly be given an interview with McKinsey & Company for a San Francisco-based position.  I explored this possibility but ultimately joined the counselor staff in Floral City, Florida, in March.  There, I worked with amazing young women and co-chiefs (as counselors are called) in the Ayukumkus group through mid-July.  Highlights included a two-week river trip on the Suwannee River (my 6th canoe trip with Eckerd), several girls' camp graduations, reading Harry Potter and singing to the girls at bedtime, a "blood and guts" ramble, pow-wow fires, butterflies, dragonflies, fireflies, and noisy armadillos rustling under the tent/cabins at night. 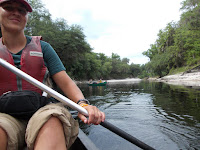 The job was every bit as magical as I remembered, and incredibly demanding.  If I arrived by 8:15 AM on Wednesday, I'd stay until late Sunday night or early Monday morning.  As counselors, we were on duty from 6AM until 10PM.  During the eight nighttime hours, we were still near the girls in campsite, but we were relieved by nightwatch staff to write documentation (~2 hours per day), decompress with a co-counselor, check phone messages, attend to any personal needs, and sleep.  It was invigorating and exhausting.  On our two days off per week, I had adventures with other staff in nearby Inverness or around the region.  Yet without a car, I felt alternatively stranded or overly dependent upon my co-workers' generosity.  I had come in response to a letter seeking short-term assistance, and while it was a fantastic 1/3 of a year, it was not a permanent arrangement.  We explored a teaching position at camp, but ultimately I instead accepted an opportunity to join the student affairs staff at South Dakota State University.

When I visited my sister Beth (now a senior) in Brookings the weekend before departing for Florida, I would have never guessed that I would return five months later to become a Jackrabbit myself.  Halfway into my yearlong contract, I am amazed at how filled my life has become with a family of students.  As a residence hall director, I oversee two halls that consist of three Living Learning Communities (LLCs): Ag/Bio, Healthy Lifestyles, and Honors, with a combined 300 students.  I have 18 student staff members who serve as Community Assistants, and whom I absolutely adore.  I've taken up water aerobics and learned to rock-climb at our awesome Wellness Center, and the commute from my residence hall apartment to my office is an enviable two-minute walk.  Beth generously shares her car with me, but I spend most time on campus.  Living two blocks away from her is awesome, and we manage to live independent lives but still see each other and collaborate fairly frequently.  We're looking forward to co-presenting a talk at the first-ever TedX-SDSU in February.

While I am having a blast in my current life, I continue to explore other paths.  In October, I again took the Foreign Service Officer Test and passed.  With the help of some editing-savvy friends, I revised and submitted my written narratives and will soon learn whether I advance to the third stage of the selection process.  After the exam (and relevant preparation), I joined the cast of Lie, Cheat, and Genuflect, a farce produced by Brookings Community Theatre.  As "Jane," I was onstage for the first time since high school.  It was an enjoyable experience and begins a humble theatre résumé that I hope to build upon in the coming years.  I continue to conduct Harvard College interviews as an alumna, and I'm making progress on personal goals related to music performance, writing, and artwork.

A lovely (and very much intended) consequence of my time in Florida and South Dakota has been the chance to spend many great moments with family.  I was able to attend the Gasparilla coronation and my cousin Emma's graduation, an extended family Easter, and a lively Timmel family reunion.  My mom worked hard to bring all my siblings and nephews to Florida to spend time together prior to the reunion, reaffirming the importance of family connections.  Likewise, back in SoDak, I've had several opportunities to spend time with my family in Salem, Vermillion, and Sioux Falls, including Becky's confirmation, Anne's coronation as Homecoming Queen, and numerous performances and school activities.

The year has been fruitful.  I've had three jobs, added two locations to the places I call home, and widened my family with marvelous youth and colleagues, while clocking many hours with my longtime relatives.  I've been challenged and rewarded.  As I reflect on the past twelve months, I am grateful for their twists and turns.  I look forward to an equally unpredictable 2016.

Here's hoping the year to come is filled with laughter, light, and love.

Yours,
Andréa Mayrose
Posted by Dré at 6:51 AM No comments:

Email ThisBlogThis!Share to TwitterShare to FacebookShare to Pinterest
Newer Posts Older Posts Home
Subscribe to: Posts (Atom)
This blog is a reflection on my own, unique experience as a Peace Corps Volunteer in Zambia. All views are my own and do not represent the views of the United States Peace Corps, government, or people.

Dré
"I'm nobody! Who are you? Are you nobody, too? Then there's a pair of us — don't tell! They'd banish us, you know." (E.Dickinson) Current Adventure: Community Development/Rural Education Volunteer, Zambia. February 2011--April 2013. Come dwell with me!

Books I've read (since my arrival in Zambia)

Zen and the Art of Motorcycle Maintenance,

Revenge of the Babysat (yes, that's a Calvin & Hobbes collection),

Nine Hills to Nambonkaha: Two Years in the Heart of An African Village (Sarah Erdman),

In Defense Of Food (Michael Pollan),

Three Cups of Tea: One Man's Mission to Promote Peace...One School at a Time (Greg Mortenson & ___),

Travels with Charley: In Search of America (John Steinbeck)

Memoirs of a Geisha


Cocktail Hour Under the Tree of Forgetfulness (Alexandra Fuller)

The Botany of Desire (Michael Pollan)

Becoming Myself: Essays on growing up Female (ed. Willa Shalit)